Listen to the speech by Steve McNallen in REAL AUDIO!

Swansea is a quiet neighbourhood in Toronto. However, on the night of Saturday, February 27th, 1999, the local cell of Anti-Racist Action disturbed the tranquillity of the neighbourhood with a violent attack on a peaceful meeting of the Alternative Forum. The ARA presence no doubt created a temporary shortage of squeegee people in downtown Toronto.

Alternative Forum has, for the past 20 years, held meetings in a number of locals. These meetings have featured a wide variety of speakers covering and equally wide variety of topics. The common denominator is that most topics would be considered by some to be politically incorrect. Although that night's topic was involving archaeology usually does not generate much excitement. 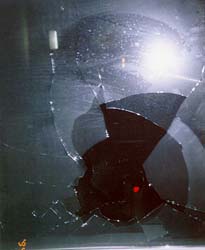 The ARA brigade, comprised of the usual suspects who seem to show up at all local demonstrations ranging from anti-fur to pro-Iraq, attempted unsuccessfully to break into the meeting room, after having caused some minor damage to the lobby area of the building. One window was smashed from the outside, giving birth to the new appellation, Crystal Night II. Some chanting of the usual slogans (Hey, hey, ho, ho, etc., etc.) ensued. Police were called, the demonstrators dispersed (probably in order to make curfew at the shelter), and the meeting continued as scheduled.

The ARA thoughtfully left behind a number of leaflets. Included in the material left behind was research material which appears to have been supplied by B'nai Brith, thus establishing a physical link between BB and its apparent proxy, the ARA. This material has been turned over to police authorities for appropriate investigation.

The ARA letterhead features an ominous logo of a head disguised in a ski mask, Since there are no ski slops in the area of the

meeting, perhaps they should look up the Prime Minister in Whistler. It would appear the ARA (at one time financed in part by the Trillium Foundation an arm of the Ontario provincial government) is competing with the Animal Liberation Front (which probably has an overlapping membership) as the leading terrorist organization in Canada today. Thinly-veiled threats to the hall management, in the usual Unabomber-style language, were made.

In the Bloopers Dept., this material indicates the rocket scientists in the ARA are under the impression that the hall is located in Etobicoke, a suburb of Toronto. Not so! Although Etobicoke is not all that far from the hall site. The hall is simply on the wrong side of the Humber River to qualify. Perhaps the ARA considers everything west of Bathurst Street to be in Etobicoke. Or perhaps they have spent too much time shuttling between the Lakeshore Psychiatric Hospital and the Mimico Reformatory, both of which are indeed in Etobicoke.

Many have commented on what appears to be the declining civility in modern society today, whether it is on the picket line, the hockey rink, the schoolyard or the highway. The war of ideas is, unfortunately becoming literal. It is difficult to fathom what the ARA, or its handlers hope to accomplish through violence. Did they win any friends or influence any people that night? Was their cause advanced, except in their own minds? Rocks through windows could easily graduate to bombs. Perhaps the ARA has no confidence that their point of view can compete in the open marketplace of opinion. Perhaps only a psychologist can properly analyze their methodology.

We, however, do not lack such confidence. We function in the sunlight, not the shadows. We will even go as far as to give their website (http://www.web.net/~ara) a complimentary plug at this time. We invite our readers to check it out and compare their product with ours. We are confident any comparison will speak for itself.