Watch the whole Battle of Vancouver! In Real Audio and Real Video

THE BATTLE OF VANCOUVER

The freak show assembled outside the main branch of the Vancouver Public Library shortly after 6:00 p.m. on Thursday, September 30. They were there in full force: counterculture crazies with rings in their eyebrows, militant lesbians, members of the Communist Party of Canada, shouting members of the International Socialists -- all committed to one goal: the stopping, by any means, of the Canadian Free Speech League's fundraising meeting for former North Shore News columnist Doug Collins. Next February, Collins heads to the Supreme Court of British Columbia to seek judicial review of a B.C. Human Rights Commission tribunal which found him guilty of spreading hatred or contempt of certain privileged minorities.

In Canada, the militant left, the professional "anti-racists", follow a formula for trying to prevent anyone who disagrees with them from holding a meeting.

First came the demonization. The CFSL were accused of spreading "hatred" by Victor Wong of the Vancouver Association of Chinese Canadians. The anarchist ARA (Anti-Racist Action) which, in Ontario, has engaged in terrorist acts and beatings of opponents, termed the meeting "a racist public meeting." This was restrained compared to placards and chants of demonstrators at the meeting: "Immigrants in; Nazis out!" they hooted in chorus.

Step 2 was reported in the VANCOUVER SUN (September 30, 1999): "The Canadian Jewish Congress and the Vancouver Association of Chinese Canadians complained to the library for renting space to the Canadian Free Speech League. 'We will protest peacefully Thursday to show that it's inappropriate for the library, a publicly funded place, to allow this type of hatred said Victor Wong, with the Vancouver Association of Chinese Canadians. Wong maintains that the library has a responsibility to deny organizations like the Canadian Free Speech League space to air their controversial opinions." [Wong illustrates one of the drawbacks of immigration from "diverse" sources. Many newcomers have no understanding or appreciation of European traditions of democracy, free speech and individual liberties.] "Publicly funded facilities, including libraries, should keep their meeting room rental policies consistent with the principles enshrined in the B.C. and Canadian Human Rights Acts, said Nisson Goldman, vice-chairman of the [Canadian Jewish] Congress's Pacific Region."

John Fitzpatrick, Secretary Treasurer of the Vancouver and District Labour Council issued a press statement:: "The hate mongering and racism peddled under the guise of freedom of speech by this group [CFSL] has no place in a prestigious institute like our Public Library... We will confront and expose these groups [CFSL] for what they are."

In a September 25 release Alan Dutton, Director of the Canadian Anti-Racism Education and Research Society called the organizers of the fundraiser "a front for neo-Nazis." Further, Dutton demanded that the meeting be cancelled. Otherwise, he threatened: "If the contract is not revoked, the Canadian Anti-racism Education and Research Society will hold a public meeting at the Library to protest the use of public facilities by hate groups." 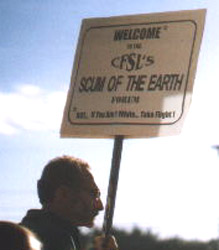 The demonization of the Doug Collins, Doug Christie and the Canadian Free Speech League and the threats to stage a confrontational protest failed to move the library to cancel the meeting.

The noisy protesters crowded around both entrances of the library from about 6:15 on. The intensity of their chanting and shoving increased. Many infiltrated into the hallway above the downstairs Alice McKay meeting room for the CFSL event. About 6:45 the police locked the doors and many of the protesters out of the library. However, by not moving the protesters across the street, the police effectively let them control the agenda. Locking the library 15 minutes before the meeting kept most of the anticipated attendees out as well.

As the meeting's planned 7:00 p.m. start approached, demonstrators inside, under the direction of Mullins, locked arms tried to prevent all but a few recognized allies from entering the meeting. Again, the police failed to arrest or remove these people. 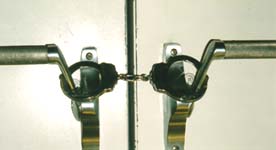 Just as the meeting was about to start, a shock force of about a dozen burst past police lines and pushed and pounded against the door of the meeting room. They would keep up their pounding and din throughout the meeting that lasted more than an hour. Library head Eric Smith confirmed to Vancouver businessman Jud Cyllorn president of the Procult Institute that he had made the decision in co-operation with the police not to order the removal of the screaming protesters who pounded on the meeting room door or those who blocked access to the meeting by e number of interested attendees. 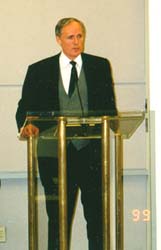 Shortly after Doug Christie opened the meeting, the fire alarm was set off and the throbbing pinging continued for about 10 minutes.

Early into Christie's introduction, a tall protester of East Indian origin began to heckle. He claimed to be expressing his freedom of speech. His constant heckling and interruptions would continue all evening, despite numerous requests from other attendees that he be quiet and let them hear the speakers. Earlier he had snarled at Marc Lemire: "I am the face of the enemy." He had made semi-coherent remarks about rifles and shooting, as his eyes seemed to bug from his gaunt face. 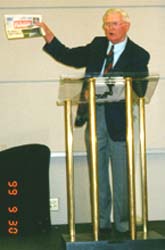 Doug Collins speaks on his constitution challenge of BC Law

The meeting proceeded despite the constant chants and pounding on the door and the incessant disruptions of the East Indian leather lungs. When Doug Collins mentioned the column he'd written on the movie Schindler's List, a woman, who had been seen talking to the East Indian protester strode right up to Collins and started wailing. Claiming to be Jewish she asserted the preposterous: that she didn't have a single living relative. All had died in the holocaust. As the woman appeared to be on the shy side of 45, for her claim [that she had NO living relatives] to have been possible, she would have to have been born either by cloning or by having dropped in from Mars. 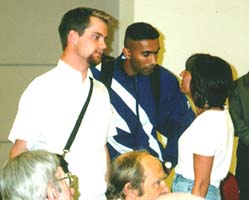 3 of the agitators in the meeting. All claim to be "there as individuals"
yet we caught them planning tactics to disrupt the meeting.

The demented pounding, the lunatic interruptions conspired to make the entire event a decent into some bizarre theatre of the absurd.

The Vancouver media, with the exception of the PROVINCE and the North Shore News ignored or downplayed the descent into mob rule and the sorry abdication of responsibility by the Vancouver Police. By the next day, Radio Station CKVU was focusing not on the effective shutting down of the library by the unruly protesters, but on the accusation that some of the Vancouver police may not have been wearing their badge numbers!

More on the riot.